And should be easy.

Because its origin…SALES…should always be simple and easy.

That’s not to say there isn’t a TON of expertise involved in crafting the finished article.

But rather, once you know what works, you simplify, prune to perfection (and keep it consistent)…

…a formula that should never change.

The best businesses and brands out there have winning formulas.

Whether the trade is:

…the best in class approach always rests upon a certain signature approach which is never compromised.

It’s how they flavour and package their competitive advantage.

For the me-too’s out there, formulas are not impossible to decode.

But the success in using it is more in the execution than in the substance itself.

A skilled approach to persuading prospects to buy.

And as the approach is skilled, so should the marketer’s final delivery be.

Content marketing is about engaging the customer at the point of the sales cycle they are in with a meaningful, value adding conversation.

It’s free – but the prospect comes away better off for spending the time.

The marketer or business had lost time sharing value, but see it as an investment in lead generation towards a potential sale.

Content marketing is the little brother to the savvy salesman.

The savvy salesman is the one who knows that the prospect is in the driving seat.

And his job as a salesman is to persuade the prospect:

Plus, the savvy salesman knows this doesn’t happen because of his promotion, product or pushiness.

The savvy salesman knows its all about getting alongside the prospect (yet with a friendly sort of authority) coaching them through the steps of a best fit solution or recommendation.

Giving the prospect the tools and confidence to arrive at the most beneficial decision (rather than attempting to boss them into a sale).

This is the skilled and successful approach to both sales and content marketing (its little brother).

It shows empathy, understanding and familiarity (experience) of being in their shoes and finally…

…a well thought out solution that answers all questions – at an price that the prospect is convinced is a fraction of what they’d be willing to pay for.

The prospect comes off feeling like they’ve just struck gold.

This is the savvy sale.

As I said earlier, content marketing is the little brother to the savvy sale.

The literature based version to our winning salesman who wins the hearts and minds.

The disadvantage of content marketing is that it’s not LIVE, but scripted.

(But then again, as every successful salesman would know, you can’t win at sales without a script – that works.)

Yet the advantage of content marketing is that it’s not LIVE, but scripted – leaving the prospect in control of how, where, when to digest it.

(All this, without the pressure of speaking with a salesman.)

Used for its advantages, content marketing is not a shade less effective than sales.

In fact, content marketing should mimic successful sales both in method and rewards.

And with all that, here is my chosen example of content marketing – the savvy sales way:

The reason I’ve chosen this site to demonstrate how a savvy sale is won online is simply because:

WPBeginner.com has the fruits.

Run by Syed Balkhi, the blog is the central growth engine for his serial software acquisition business.

In just 13 years, Syed has become the owner of over 30 software businesses with a combined 8-figure annual turnover and serving an audience of over 100 million people every year.

The secret to his online successes?

The concept behind WPBeginner is quite simple enough.

It’s user-friendly enough for anyone to pick up.

But if you would like to get serious results with it, you need a little extra technical support.

And that is where WPBeginner.com has been positioned by it’s owner, Syed Balkhi.

(As the support desk for the beginner WordPress economy.)

The information within the site comes in the shape of tutorials, recommendations and deals.

It serves the marketplace both as teach and broker. A very effective combination if you can muster it.

The results speak for themselves (as mentioned ab0ve), but the question remains:

How EXACTLY does the content of WPBeginner translate so readily into products sold?

I’ve taken their latest post as my example to draw from.

The post is called, “How to Customize Your WordPress Theme (Beginner’s Guide)”

The topic isn’t all that important for the sake of this illustration.

But it’s worth noting that the same identical approach (formula) is used in EVERY other article on the site.

Once you’ve seen one, you kind of seen them all – but the bottom line for Syed and his team is that they work SO well.

Immediately resonate with the situation of the prospect and establish relevance with an obvious question that reinforces that you understand ‘the reason why they are here’.

Relate to the nature of the problem.

In this case, the prospect wants to identify the built-in possibilities of customising a WordPress theme. Plus, they would like to know of any plugins they might use to go a little further still.

Finally, the article promises to deliver exactly that. 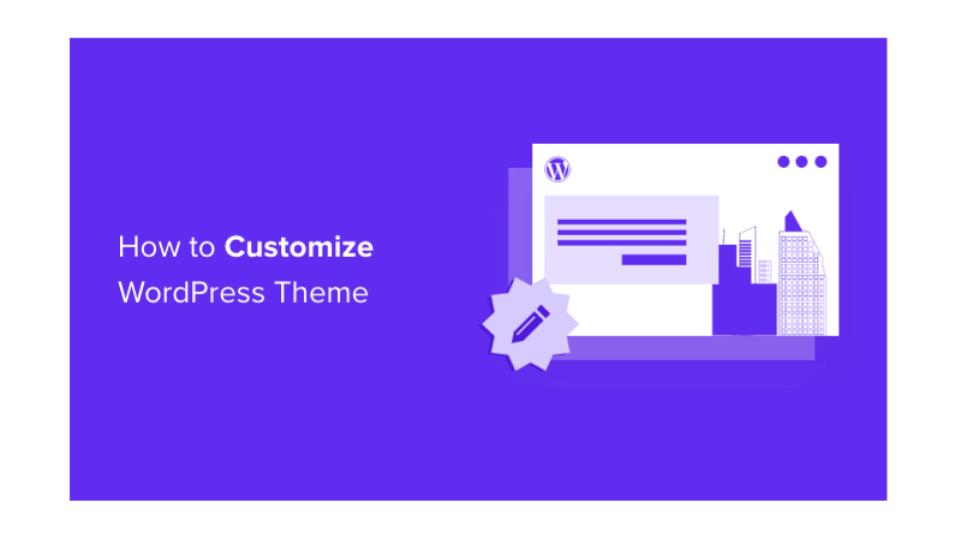 This simple illustration at the start of every post does 3 important things for the prospects user experience: 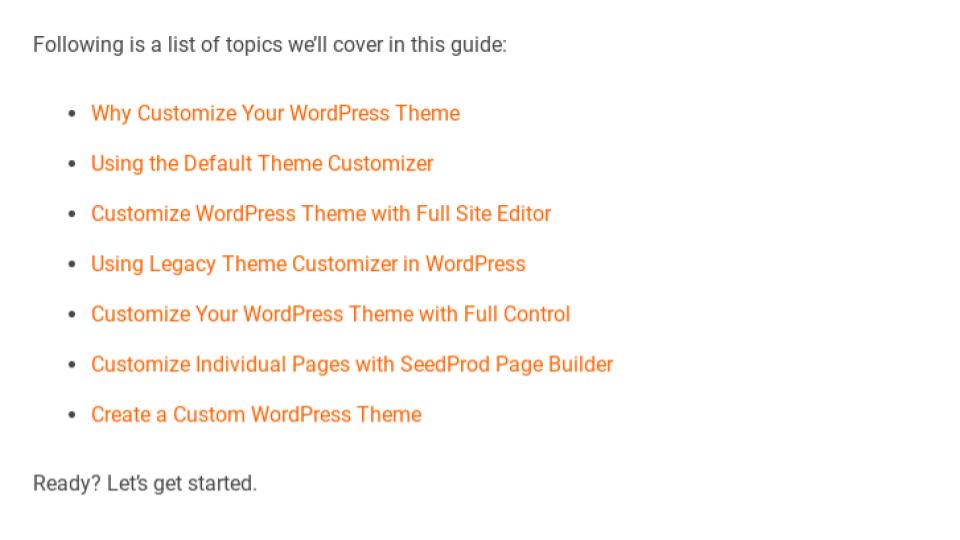 A quick list to confirm the detail of what the prospect will receive.

This gives them the control of choosing how to best use their time over the coming minutes.

Either to read now…save til later…or, to jump straight to the bit they’re looking for the most. 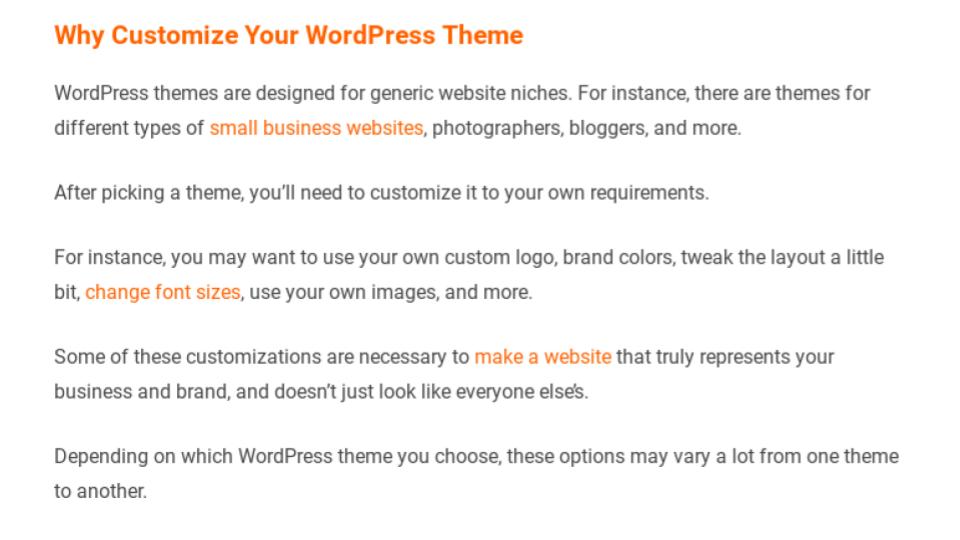 “Hey, you’re on the right thinking!”

This is what these simple lines do for the prospect.

They confirm that from an expert’s point of view, you’re right for asking the question, “and here’s why…”

The example above breaks the news to the prospect that if they’ve just chosen a WordPress theme, what they have is a generic shell.

The next move is to make it theirs but customising it.

By customising their website, the prospect can make their business also stand out from the crowd.

This customisation can be performed with the tweaking of some simple admin options.

The common way round.

In this default example, WPBeginner shows the prospect the low value, easy start route to customising their web theme.

No bells, no whistles – but the quick, easy, baseline alternative. 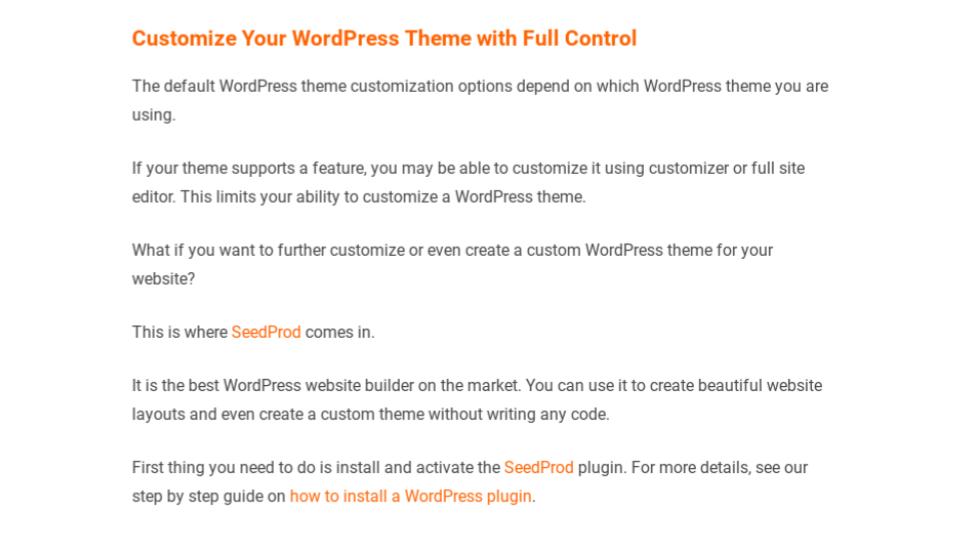 “And here’s one that I made earlier…”

A classic and seamless transfer from ‘the long way round’ to ‘did you really think that I was gonna leave you there?’

In true expert salesman fashion, the focus of the tutorial switches effortlessly to the real solution.

Here, WPBeginner starts with announcing the drawbacks of using the ‘beaten track’ route.

It speaks of ‘depend’ and ‘maybe’ – this give NO assurance to the beginner that those methods will result in exactly what they are looking for.

BUT then, there’s this SeedProd thing…which claims to be the best builder and no code needed.

Plus, all you seem to have to do is simply install the thing and GO!

This sounds perfect to a prospect whose spent the last so many hours and days looking for a straight forward answer to their problem.

Just when the prospect has gotten what they needed – and without mention of any cost.

There’s this next offer which blows them away.

…but wait…isn’t that going to be difficult for a beginner to do?

Not with SeedProd apparently. WPBeinnger go on to tell us that it’s actually as simple as “dragging and dropping” whatever you want, wherever you want it. 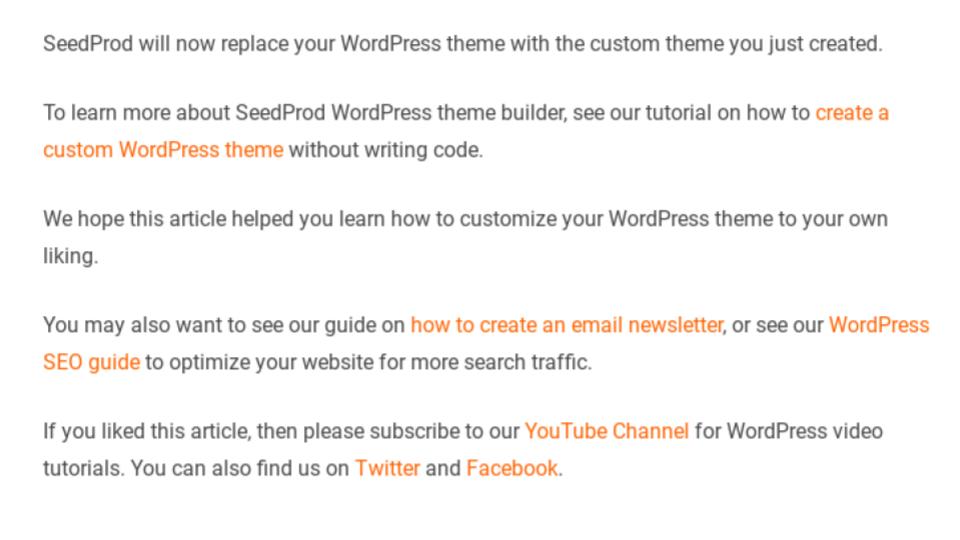 The sales pitch being a tutorial literally walked the prospect through using the product – beginning with links to where you can install it.

So there’s not need for the big close.

Instead, WPBeginner direct the prospect to a more in-depth guide on how to create a WordPress theme with SeedProd plugin. Plus, some other guides on complimentary topics:

…and last of all, an invitation to follow WPBeginner on social media to stay in touch with the latest tutorials.

All in all a complete masterclass in the online savvy sale.