Readers pay a publisher (preferably, in advance) for:

“…[the] collection, preparation, and distribution of news and related commentary.”

In the days before ‘soft copy’, this kind of operation was a HUGELY capital intensive process.

(Just think monster print presses churning out millions of copies around the clock to beat the deadline of landing  on breakfast tables nationwide).

And where there’s a need for big capital, this typically calls for big business.

Hardly ever an individual.

Sure, you always had individual authors, but then again they were contracted to publishing houses.

As they say, the house always wins.

That is until paid newsletter subscriptions.

(Well actually, even with paid news letters, the house keeps winning. But at least it seems to be sharing more of its ‘wins’ with writers.)

Quick introduction into the rise of paid email newsletters

Here’s what I mean…

Business and markets move by information.

Ever since the arrival (and our awakening) to the internet and its ‘lightening-quick’ data transfer, it has swiftly become the #1 tool for modern day business.

The internet is a type of information technology.

A way or manner of transferring data.

But without the availability platforms to build on it, opportunity waits in the wings.

And its been the emergence of internet-based platforms within industry that has lead to economic disruption.

(The way we do business being turn on its head.)

In recent years, journalism and the distribution of news and opinion has been relatively untouched.

And whilst they still do and will retain vast majority market share, commercial advantage and workforce.

The playing field is gradually levelling out.

“…publishing, payment, analytics, and design infrastructure to support subscription newsletters” are becoming just the leverage journalists have been looking for to turn the tables on their trade.

They give writers a means of taking their readership with them (without any reliance on corporate publications for audience).

They’ve given writers their voice back.

In fact, Substack and similiar platforms, are fast becoming a refuge for journalists in every category of journalism.

Many are packing in the day job (and lucrative contract) for the liberty to do what they enjoy – with no ties.

What exactly does Substack offer?

For many writers, this is the dream.

But can you really earn a living from selling email newsletter subscriptions?

According to Newsletterspy.io (a newsletter data aggregator examining over 100,000 newsletters), 50% of paid newsletters of various list size charge $5 per month.

You only have to do the maths to figure out how many fivers (subscribers) you’ll need to pay your bills, save for the future and live life.

But whilst steep, it can be done.

And there are many like it. However, as we said: there are ‘BIG names’.

But what about the regular ‘Joe nobody’?

In an article written by Substacker, Simon Owens, a longtime journalist, marketer, and PR professional living in Washington D.C. – Simon unveils the real odds ‘stacked’ up against his subscription hunting fellows:

“If you search for the word “Substack” in Google News, you’ll find story after story that namechecks a handful of the same writers.

Prior to launching their Substack newsletters, these writers tended to work for high profile media outlets that helped them build huge Twitter followings into the hundreds of thousands.

When they announced their Substacks, their announcements were amplified by hundreds of blue checkmark colleagues who encouraged their audiences to sign up and subscribe.

Most of these high profile writers reached 1,000 paying subscribers within days or weeks of launch. Some even received generous six figure advances from Substack itself.

So, there we have it. The real picture from someone who knows because they are doing it.

Earning liveable salary is possible even if you build an email newsletter without an established following.

But being an industry influencer certainly speeds things up and helps you earn a full-time salary within weeks rather than months or even years.

Are there any quicker alternative routes to earning a liveable wage from paid email newsletters?

The metrics for paid email newsletter earnings are quite simple.

So, to raise your earnings you either:

To achieve #1 – you’ll need to increase your lead generation.

In other words, spread your net wider to catch more fish.

For most writers, this top end of the funnel is achieved by running a blog via their own website.

Their audience reach by blogging will be directly proportional to their writing output (blog posts) and promotional activity to drive people to the posts.

A slow grow. Hardly a quicksprout.

Whilst thinking about alternative routes for speeding up the paid email newsletter equation, I came across a solid solution:

It came from discovering this example, during some online research:

It’s a website owned and run by one of my favourite online marketers, Brian Dean (founder of Backlinko.com)

To fill you in, Exploding Topics is a website which hosts a software that generates the names of topics which are ‘exploding trends’ in search popularity online.

Things that are catching on which are on the exponential rise.

A great read for online entrepreneurs and tech investors wanting to ride the next big wave.

I’d known about it for some time – and was familiar with what it does.

But as often, the business model penny dropped a little late for me.

Some are disclosed, others are hidden and offered only to paying subscribers.

The website is run as an email subscription service – powered by a software program.

There are 3 ways to get your exploding topics:

Now, to be clear – although Exploding Topics is a SaaS (software as a service), the way it is marketed and all it’s revenue generation is via a paid email newsletter subscription.

So, a paying member is essentially paying for an email with information and data in it generated by a software, but written up by an expert.

Here’s an example of one of their emails: 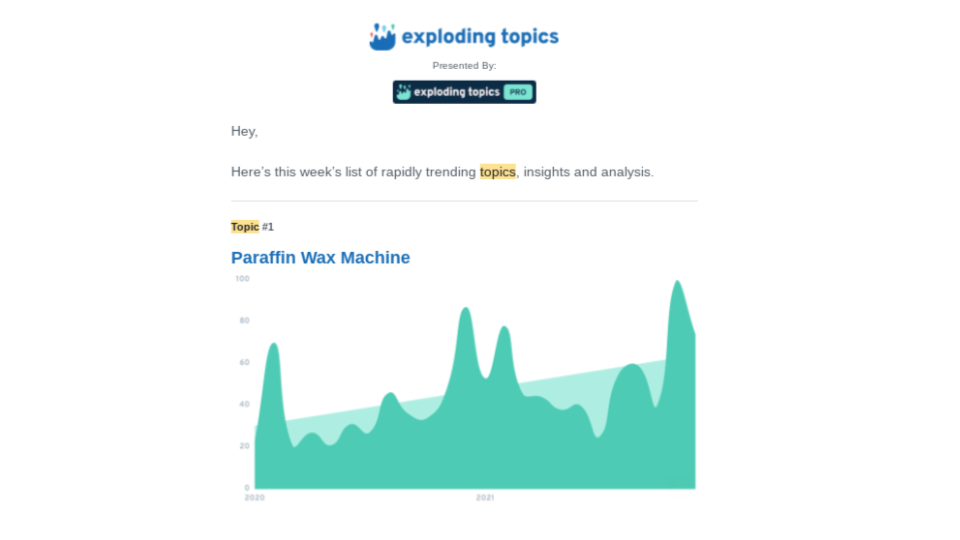 All in all, an absorbing read (for the right audience).

A who’s who of entrepreneurial trends hitting their tipping point.

So, how much is it to get on the PRO programme? 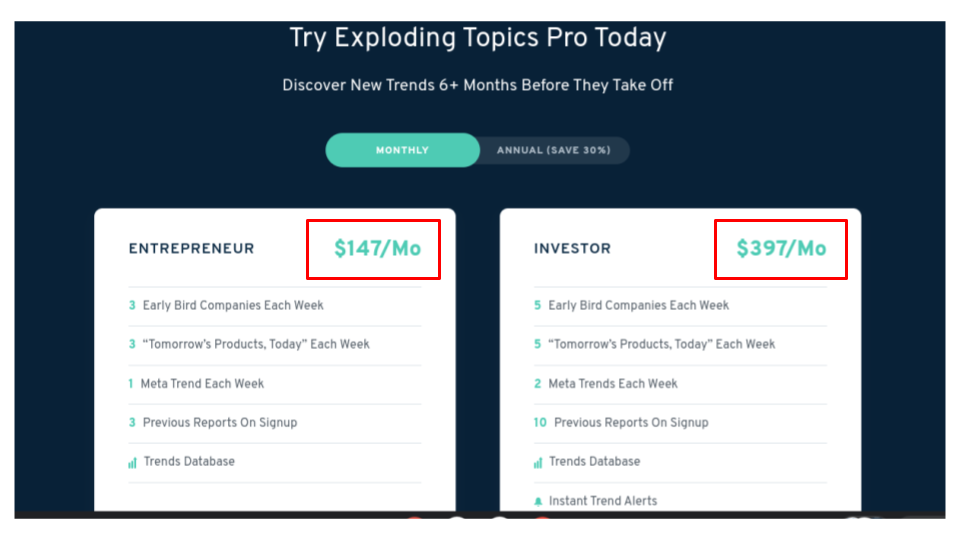 A far cry from the paid email newsletter industrial average of $5 per month. 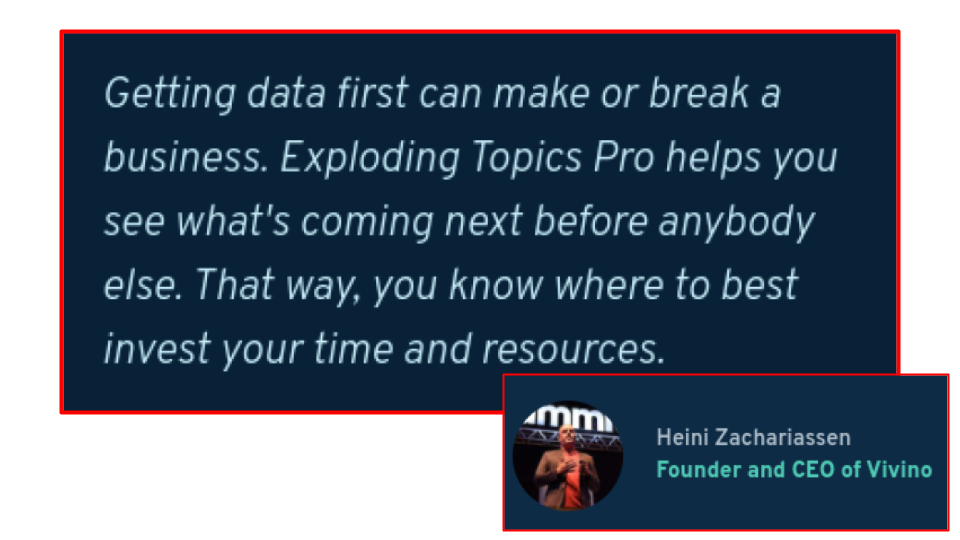 It all comes back to value proposition.

A disposable piece of entertainment.

The team at Exploding Topics, however, are selling proven, profitable investment tips that nigh on impossible to get – UNLESS you already know.

This is modern day gold dust to a start up investor.

A tip off at the right time and in the right niche could be worth $billions.

Staying ahead of the curve therefore is surely worth a couple of hundred dollars on a black Amex. 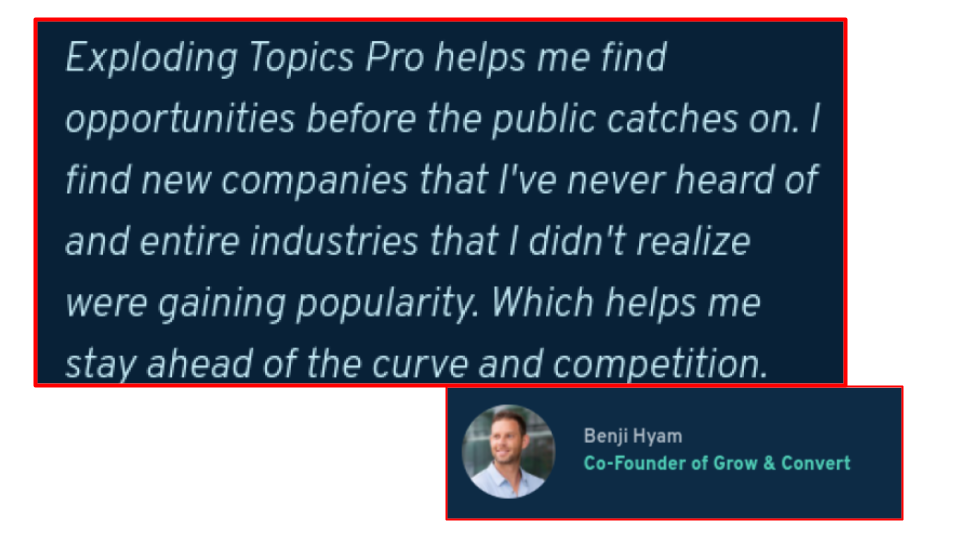 A viable paid email newsletter charged at up to 80x the industry average price (and popular).

It differs in that its really email newsletter as a service (ENaaS). Not opinionated entertainment or commentary.

Giving them then opportunity to ‘get in there’ ahead of the competition.

Even priced at $397/month – with the potential gains to be gotten, the cost benefit screams BARGAIN.

So, that’s my advice for selling paid email newsletter subscriptions at a higher rate:

Deliver a valued service, not an opinion. And to the right crowd.

You’ll be on your way.